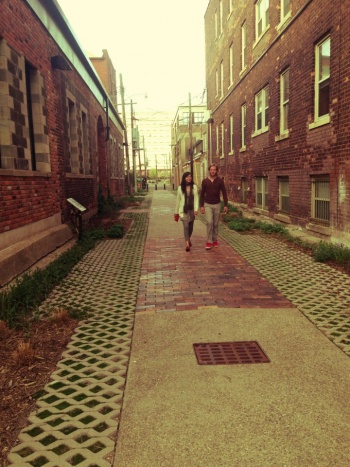 Chad and Cancion Dickinson walking through the alley.

Why did you want to develop a green alley? This idea originated with John Linardos and Dan Scarsella at Motor City Brewing Works. They wanted to clean up the alley and possibly use their alley entrance as a main entrance. We agreed to help them with it, with the idea that the alley be developed as a 'green' alley. We wanted to get all of the water that was pouring into the storm sewers back into the water table. In addition, we wanted to eliminate the heat island effect by removing pavement and putting in at least 50% permeable surface, and to add Michigan native plant material. By adding bollards at either end, we signaled that we wanted the alley to be primarily for pedestrians.

How long did the entire process take? We spent about 1 1/2 years in design work, but the alley itself only took about 2 months (and much of that time involved repairs to our water main and sewer, as we had a sink hole that needed to be repaired).

How much did it cost and did you get help with the funding? The project cost about $60,000 (about $11 per square foot). It was funded in its entirety by the Kresge Foundation, the Americana Foundation, and the Colin Hubbell Foundation. DTE supplied the LED lighting.

What contractors did you use, and what role did each of them take? The alley was done primarily with 3 contractors: Foundation work and brick work was done by Jeff Klein of Classic Landscaping and Design (Clinton Township); cement work was done by Mike Mancini of Redford Cement (Redford). We also had our soil tested by John Lamb at McDowell & Associates.

Where did you get the permeable pavers? What is their purpose? We bought the pavers from Mike Curmi of Oaks Concrete Products in Wixom. The purpose of the permeable pavers is to allow water to permeate the surface but provide enough strength for a fire truck to drive over them.

How did you select the plants to put in the alley? We had a garden committee that worked about 6 months to develop lists, cross-referencing lists from books and on-line research. We looked for plants that were native to the state of Michigan and were adaptable to an urban environment. We also wanted 'well-behaved' plants (not too aggressive). Kirsten Lyons took the lists and did CAD drawings of the alley, placing the plants according to levels of light, color, bloom time, need for moisture and height. For information on the plants selected and maps of the alley gardens, see our gardens page.

Did you have any trouble working with the city on the project? As far as we know, this is the first green alley in Detroit, so the fact that we wanted water to drain to the sides of the alley instead of towards the middle caused some concern for the city, and understandably so. We showed them how this has worked in other cities, and did lay down an impermeable membrane on the north side of the alley, next to the Blackstone, which has a basement.

How much maintenance is required? From April through October work on the alley plants averages about 12-15 hours of work a week (more in June - August and less in other months). In the winter we do shovel the snow.

Are you finding others in the area wanting to green up their alleys too? Yes! Many people and organizations have contacted us asking for advice, and we are happy to work with anyone interested in greening up their alleys.