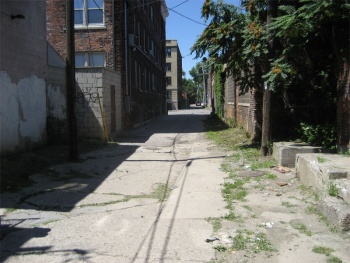 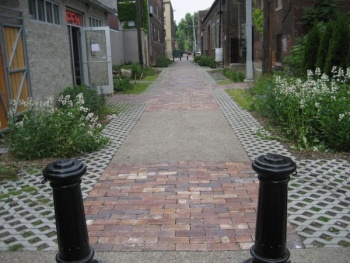 This project was intended to create a model for sustainable alleys of the future for our city and region. So often an alley is a visible representation of the worst of our culture...the waste, trash, concrete...no life...an urban wasteland. And yet, we long for a more respectful relationship with the earth than our alleys represent. Our alley spaces have great possibilities. We need to just envision a new future and make it happen. Who knows where this may lead? All we need is one green alley...and then another.

This is the story of one alley in Detroit. It is between Canfield and Prentis off Second in the Midtown section of Detroit. In 2008, this alley looked abandoned with trash, broken pavement, overgrown weeds, and neglected sides of buildings. It is now a vibrant greenway for pedestrians and bicyclists to enjoy the beautiful gardens, stop and shop at local business establishments or gather with a few neighbors to talk about the day.

In 2008 the people of Motor City Brewing Works and the Green Garage began discussions of the alley's possibilities. A garden group formed to design the gardens and select Michigan native plants. Plans were drawn up and approved, we teamed with the Midtown Detroit, funding was received and in April 2010 construction began. The alley's official opening was September 16th, 2010.