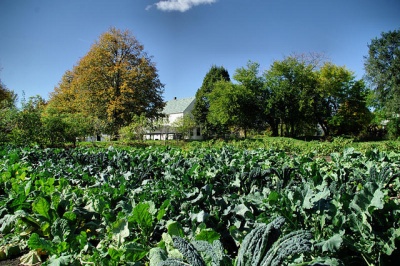 Detroit has a long and rich history of urban agriculture, beginning in the 18th century with the establishment of ribbon farms, long, narrow plots of land perpendicular to the Detroit River, by French settlers.

In the late 19th century, Mayor Hazen Pingree advanced a social welfare program based on urban agriculture, encouraging impoverished Detroiters to grow their own food.

Mayor Coleman Young championed urban ag in the early 1980s with his Farm-A-Lot program, through which Detroiters were encouraged to grow food on vacant lots neighboring their own.

In the early 1990s, Detroit Summer paired young Detroiters with community elders (the "Gardening Angels") to create and cultivate neighborhood community gardens as a way to strengthen their communities.

Today, urban agriculture is an integral part of life here. More and more people are choosing to grow their own food, whether in gardens or farms. For a list of farms in the city, see the Farms section of our Fresh Food resource page.

Before attempting to grow crops in Detroit, test the soil to see how well it can support agricultural use. Michigan State University Extension Services offers a testing service. The test kit itself can be ordered from [http://www.bookstore.msue.msu.edu/product/soil-test-kit-selfmailer-1116.cfm here for $20. You mail in the soil sample for testing and they send you the results by mail. You might also study what types of soils the prospective plants require, so you can make the best match.

This testing, however, will not test for toxins in the soil. That would need to be done by a Soil Engineering company. The problem is that you could get a general idea, but it varies every 10ft (or less), because in urban areas, you have houses torn down with lead and asbestos, oil dumped, heavy metals in the air, etc. Tests for particular toxins tend to range in the hundreds of dollars.

Drainage is best done through observation and testing. Go to the prospective site during a rain storm and see where the water runs off...does it pond in areas? How long does it take for the water to drain?

Regarding testing for drainage: on our website are instructions on how to do a percolation test. It can be found here. This is free.

Drainage is most affected by soil type (sand, loam, clay) and the slope of the land. We have a very high and thick clay layer in Detroit which makes our soils, in general, difficult to drain. (Clay is the most impervious of soils...sand is the least.) This is because our region was a former lake bed in the ice age. So if we do have any drainage it is the result of human influenced rubble on top of this bed of clay. It's this human influenced rubble that needs to be tested.