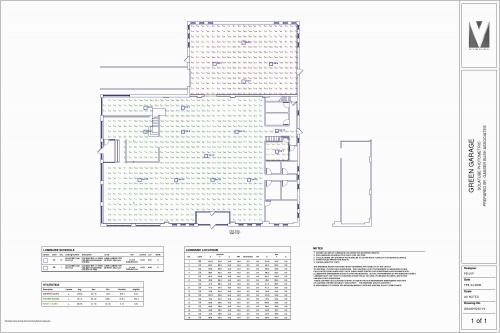 We first examined skylights/roof monitors, but quickly concluded they had relatively low value because of the low light levels they generate versus the high thermal energy they created due to their low R values (R5), versus our roof design of R55. Additionally they added great design complexity to the barrel roof design, which was already quite complex. This was initially disappointing to dismiss the monitor skylights, as we planned on trying to replicate some of the historic monitors, but it was not to be.

So we then went with the Solatube idea and found that we could get our required light levels and minimize the thermal losses because the tubes require a smaller opening to produce the required light. Working with a local supplier, Gasser Bush Associates, we analyzed the space and developed a design using the Solatube product to meet our needs. It is shown in the diagram to the right. It includes 16 Solatube tubes that are 21" in diameter. They used the 330DS instead of the new 750DS. We'll need to do a final plan once the performance data is available for the 750DS. We assumed the R value = 5. We got this from an EPA report - this was not for the new 750DS product.

There may be a need to place controls on several of the Solatube tubes to be able to block the light when a presentation is being done.

The SIP manufacturer indicated that they could cut the holes in the SIPs needed for the Solatubes during the manufacturing process.