The solar thermal collectors subsystem captures the energy from the sun and transfers it to water as heat to provide space heating and domestic hot water for the building. It does so with one or more solar collectors positioned so the sun shines directly on them. The collectors are often located on top of buildings or in open areas adjacent to the building. The sun's energy heats up the collector. Water flowing through copper tubes in the collector is heated, and returned to mass thermal storage tanks. The stored hot water is then used for domestic hot water (e.g. showers) or space heating.

There are two typical solar thermal panel types, flat panel and evacuated tube. They both have up to an 80% efficiency in converting the sun's energy into hot water. There's much debate as to which collector is best. It does appear that the flat panel has a longer life expectancy due to fewer points of failure. The tube seals on evacuated tubes are the weak link. Also, when looking at the efficiency of the collectors, you need to look at how efficient they are when placed into a system.

There are also two basic configuration designs for cold climates, closed loop glycol and open loop drainback. The main reason for the glycol is to prevent freezing of the water in cold winters, but a drainback design can also be used in cold climates.

Why is it Important?

A solar thermal panel subsystem is important to a building's sustainability because it:

When to Use It?

A solar thermal panel subsystem is best suited for locations where:

The sustainability goals for the Solar Thermal Panel subsystem are:

Our overall strategy for the Solar Thermal Collectors is:

Integrating the Solar Thermal Collector subsystem with the remaining parts of the geo-solar hybrid heating and cooling system does require some significant design effort. Some of the controls will be manual and some will be automated. The key integration and control areas are: 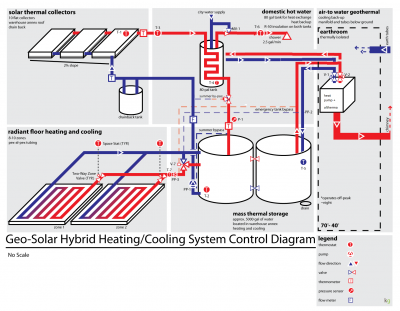 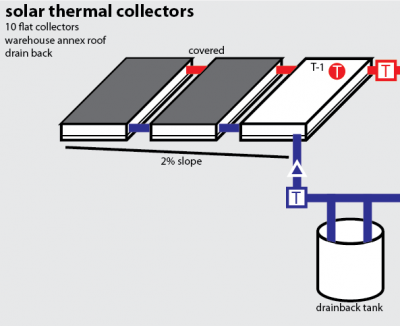 There was a tremendous amount of research that went into this design. Our primary sources for information were: