return to As Built 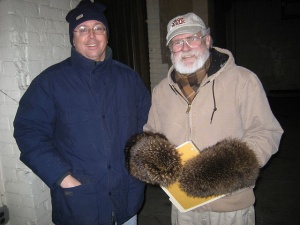 Tom Brennan and Ike Sheppard at the roof inspection. I LIKE IKE!

Before purchasing the building we had it inspected by a structural engineer named Ike Sheppard. Ike determined that although the overall structure was sound, the roof would need to be replaced. We decided that instead of replacing the roof, we would keep the existing roof intact and build a new roof over it. This way, we could save all of that material from ending up in a landfill, with the added plus of keeping the beautiful existing barrel roof and bow trusses. We bought the building in December of 2007 and knew it would be a couple of years before we could put on the new roof, so we made some repairs to the old roof so the building would stay secure and dry.

A look into the construction process for the roof....