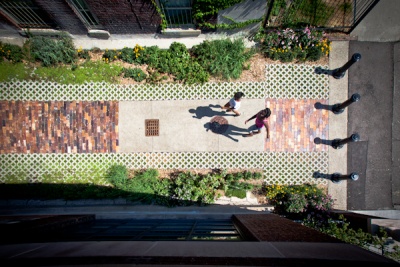 In Detroit, decades of declining property tax revenues have created circumstances such that the city is unable to maintain all of its numerous public spaces. (There are more than 300 parks alone.) But in the absence of official maintenance, individuals, communities, nonprofits, and businesses choose to take ownership of public space themselves. This page is intended to be a starting point for folks who'd like to rejuvenate public spaces near them or start to get a better understanding of this phenomenon. Let us know what you think we should add!

Ready to take over maintenance/programming responsibilities for your neighborhood park? Consider the city's official Adopt-A-Park program.

Several larger parks are maintained and managed by non-profit conservancy organizations. Incorporating as a non-profit gives communities long-term control of park space, makes fundraising easier, and allows residents to work out maintenance agreements with the city. Examples include:

There are approximately 40 square miles of vacant lots in the city. More and more, residents (& city officials) are getting creative with the adaptive reuse of these lots as diverse community spaces. Here are a few examples in Detroit & Hamtramck:

Detroit's alley network is another urban environment ripe for sustainable, community-focused development. Motor City Brewing Works & the Green Garage worked together to transform our shared alley into the city's first green alley, a pedestrian thoroughfare with abundant growing life and sustainable design features like permeable pavement. More information on that, as well as the Alley Project, a public street art gallery in Southwest Detroit, is available below.