Metromode - Locating a Project in Detroit

I had mentioned in an earlier post that this project was not originally intended for Detroit, but Ann Arbor. In our initial discussions with others, however, we kept hearing the same thing: this project belongs in Detroit. It didn't take us long to agree. Once we made the decision to begin looking for buildings in Detroit, we heard from a number of other voices questioning our decision, concerned, perhaps legitimately, about doing business in Detroit. We heard vague references to inefficiency, graft, lack of leadership. But we felt we could manage whatever came our way. Tom has decades of experience in business running large projects, and manages a number of properties located in a variety of settings. We know about inefficiencies and poor management. All of it requires patience and persistence. We knew there would be a learning curve, but decided to take the plunge anyway. And so far, so good.

One of our first contacts in Detroit was John Linardos and Dan Scarsella of Motor City Brewing Works, right around the corner from us. Right from the start they were supportive of our project. They are our model of community. They immediately connected us with others who might be able to help us with the building or the alley. They also have a finger on the pulse of whatever is happening in Midtown, helping us understand the cycle of activity. Every Wednesday they host an art show for the community at their bar. I can't think of a suburban bar that is so community oriented.

One of the people we met through John and Dan is Sue Mosey of the University Cultural Center Association. Sue was one of the first people over to hear our ideas, and has been behind us ever since. She found the funding for the Green Alley, and is the main force behind the North Cass Community Garden, a wonderful community vegetable garden which we participated in this year.

Once we bought the building and began meeting there, one of our goals was to get to know the neighbors and let them know what was happening in our building. So Tom Bradley and I spent many afternoons going from building to building, introducing ourselves and bringing cookies (never hurts). We met the delightful women of the Spiral Collective: Dell and Sharon Pryor of Tulani Rose and Janet Jones of Source Booksellers. Right around the corner, we were introduced to the women behind Avalon Bakery, Jackie Victor and Ann Perrault, a wonderful hub of activity in the area. Claire Nelson and her husband Francis Grunow operate a local boutique, The Bureau of Urban Living, and have been huge supporters. Maria Gonzalez of Wayne State's School of Library and Information Science, caught us one day while we were outside picking weeds and, and after a short discussion, formed a relationship which has led to us working with some of her students this fall, as they help us design our sustainable urban library. Finally, our neighbor, Tighe O'Meara, a Wayne State police officer, has watched over our building and called us if something needed attention. All of these people, and many more, have embraced us and our project, offering to do whatever they can to help.

I'll have to admit that we were both surprised and delighted that we found such a welcoming, supportive community surrounding us. More surprising has been our experience working with the city of Detroit. This past week we received the permits to begin construction on our building and the alley. The permit for the building was in our hands just 1 1/2 weeks after we turned in our plans. Keep in mind that there were 25 pages of plans detailing every aspect of the building design and operations. Some items, such as our geo-solar hybrid heating and cooling system, they don't see every day, which makes the speed of approval all the more astonishing. We never encountered an unreasonable question or unnecessary delay.

This is a story that needs to be told about Detroit: welcoming community and well-functioning city departments. Spread the word. And don't forget the cookies.

Picture you could include with this piece 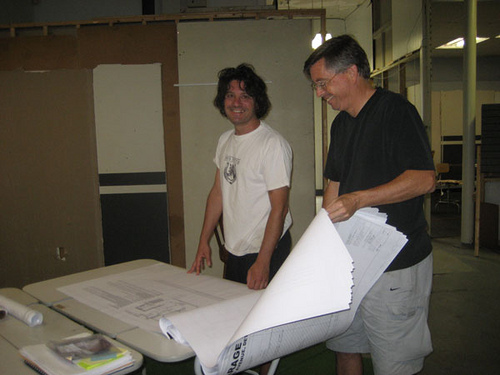