Metromode - Inspiration Behind the Green Garage

When you hear us speak of the Green Garage, we're really referring to 3 things: a building, a business and a community. The building is located in Midtown, at 4444 Second, and originated as a Model T showroom in 1920. It will undergo a historic and green renovation beginning in September, 2009. It will become a business incubator providing rental space to those wishing to start green businesses. It also is home to a community of people dedicated to a sustainable future in Detroit. Tom and I bought this building in December of 2007 with a real commitment to develop a sustainability center in Detroit, but with many of the details still to be determined. Let me explain how we arrived there.

Our initial inspiration was the IHM (Immaculate Heart of Mary) Community in Monroe. In the late 1990's, they had taken the courageous step of doing a green renovation of their Motherhouse and used this project to do what they do best: teach. We took one of their tours around 2004, and were impressed with their thoughtfulness and dedication. The fact that this is a group of limited means made their accomplishment all the more impressive. At about the same time, Tom read a couple of books that greatly influenced his thinking. The first, 'The Great Work', by Thomas Berry, is a call for us to move from being a destructive force on the earth to a more benign presence. Berry terms this the 'Great Work' of our generation. The second book was by Margaret Wheatley, called 'Turning to One Another.' Wheatley's book emphasizes the power of a community when it discovers what it cares about and joins together in conversation to effect change.

With all this in mind, and with Tom recently retired from Accenture, we began a series of weekly conversations dedicated to living more sustainable lives, and called our group Great Lakes Green Initiative. We are entering our 5th season of meetings this month. We have done a deep dive into topics such as water, energy use, rain barrels and organic foods, and have begun changing our own habits and ecological footprints.

Our initial plans for Great Lakes Green Initiative included not only a discussion series, but also some sort of demonstration center to share our growing knowledge and promote further learning by ourselves and others. A couple of years ago we began looking for a building or a site, initially in Ann Arbor. As we discussed our plans with various people, many suggested that we consider locating the project in Detroit. The IHM Community, once again providing thoughtful guidance, were great proponents of a Detroit base. So we started looking and the first building we saw, close to the Wayne State campus, was the one we bought.

In the winter of 2008, we initiated a series of discussions lasting a few months that helped us define our philosophical foundations. It is clear now, for example, that any decision made at the Green Garage will have to meet 3 criteria: environmental integrity, economic justice and community well-being. From the spring of 2008 through to the present, we have met with up to 40 volunteers who have generously shared their time and talents and have helped shape our building design, energy use, landscaping, business plan and sense of community. More on the role of community in my next post.

Some pictures that could accompany this piece 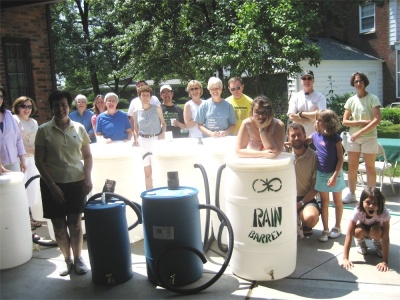