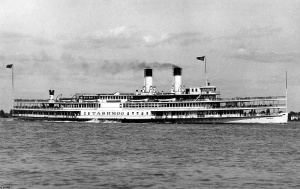 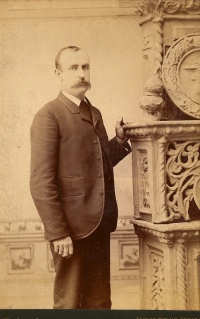 The following information comes from Ancestry.com and Andrew Olmsted of Ann Arbor, great-grandson of Dubois:

Dubois was Chief Engineer for the White Star Line, and engineer of their flagship, the Tashmoo. He was married three times.

His second marriage was to a widow, Julia Miller Olmsted, on 12 December 1877 in West Bay City, MI. Julia had three children from her first marriage, Elizabeth, Agnes and Andrew (grandfather to Andrew Olmsted of Ann Arbor).

The family moved to Detroit around 1895. This might be when Dubois started working for the White Star Line. In 1901, as engineer on the Tashmoo, Winfield was involved in a race between his ship and the City of Erie, a steamship out of Cleveland, OH. Both captains boasted that theirs was the fastest ship on the Great Lakes and they each wanted a chance to prove it. It was touted as "A race between two centuries" because the City of Erie was constructed in 1898 and the Tashmoo in 1900. A great deal of money was wagered and over a 95 mile course on Lake Erie the Tashmoo lost to the City of Erie by only 45 seconds. This was considered the most important race in Great Lakes maritime history and even merited a write-up in the New York Times as well as in local papers. Dubois was living in the Van Dyke house at the time the race took place.

After the death of his second wife, Dubois married his third wife, Blanche, who was nearly 20 years his junior. He and Blanche lived together in the Van Dyke house from 1897-1904.

By 1920 (per US Census), Dubois is living on Jefferson Ave. as a boarder without Blanche. He retired from the White Star Line in 1923 and relocated to Los Angeles, CA to join his wife and their son (do not know if this was her son from a previous marriage, or their own child). 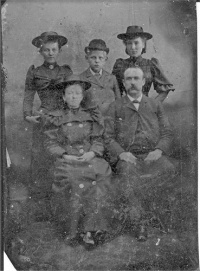 "Thank you for contacting me. This sounds like a very exciting project. Winfield was my grandfathers step-father. He married Julia Miller Olmsted on 12 Dec 1877 in W. Bay City MI. I just uploaded a scan of a tintype showing the family. This was his second marriage. I believe he was born in MI about 1851. He was recorded as working in a saw mill in Ingham County in the 1870 Census. On 19 May 1875 he married Mary Jane Davis in Bay County MI. A son, Charles, was born Jan '76. He died 20 Mar 1876. Mary Jane died 7 Feb 1877. He Married Blanche Evelyn Moyer in 1896.The 1900 census shows them living in the house on Van Dyke. His first two wife's, Mary Jane and Julia, son, Charles, and step daughter, Agnes, are buried together in Oakridge Cemetery, Bay City MI. As Winfield was a ship,s engineer, I believe he passed this on to my grandfather. About 1895 Winfield and Andrew moved to Detroit.This might be when Winfield started working for the White Star Line. In 1901 the Tashmoo and City of Erie were involved in the Great Race. A 90 mile race from Cleveland OH to Erie PA. This rivaled anything on the Mississippi.There is a pdf document, on Winfield's page,that is the New York Times story. Chapter 1 of Dwight Boyer's "Great Stories of the Great Lakes" also tells about the race and even mentions Winfield. A few things you may not know: He pronounced his name Du-boys, the 1920 census has him married but living without Blanche. My Aunt remembers him as a frequent Sunday dinner guest but not Blanche (she was born in 1914).I don't know when he died or where he is buried."

1906 - 1910: David Maxwell, Marine Engineer, Engineer on the Greyhound, sister ship to the Tashmoo