List of original French property owners in the city of Detroit 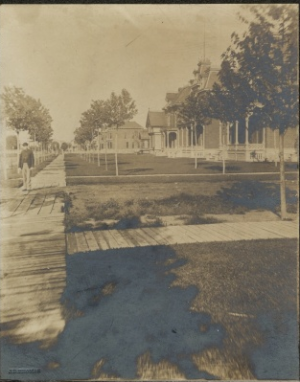 In 1783, all three parcels were purchased by the merchant firm of Macomb-Edgar-Macomb (William and Alexander Macomb, and William Edgar). At some point all of the property became the estate of William Macomb and was then passed to his three sons, David, William and John. It was from the Macomb family that Lewis Cass purchased the entirety of the property in 1816 for the sum of $12,000.

As Detroit became a leading manufacturing center in the last 2 decades of the nineteenth century, and the population doubled in size, many professionals and managers were looking for housing that would reflect their increased status. This area was considered a prime location as it was close enough for those who still had to commute by horse and carriage. Leading architects were hired to develop these substantial homes. By the 1920's, this area, particularly along Cass Corridor, was home to many of the first automobile dealerships, and this was the first use of the structure that now houses the Green Garage.

History of the Green Garage site and building

During the period from 1881 to 1919, the property presently occupied by the Green Garage contained three houses with the addresses of 800, 804 and 808 Second Avenue. We were able to find the names of the families who lived in these homes using Polk's Detroit City Directories from the Burton Historical Collection at the Detroit Public Library. Additional information about these families was found through searches of Ancestry.com, Google Book Search and the Detroit Public Library's online digital collection of photographs, Early Detroit Images. Interestingly, several of the residents of these properties were successful businessmen who had each attained a level of prominence in the city of Detroit. Here are the names of the people who lived in these homes:

Living at this address beginning in 1882 were John B. Mulliken, his wife, Emma A. (Batcheldor), and sons Harry B. and George F. John Mulliken was born in New York in 1837 and his wife was born in Vermont, also in 1837. While living at 800 Second Ave., he was the General Manager of the Detroit, Lansing & Northern Railroad, the Chicago & West Michigan Railway, and the Citizens' Street Railway Company. The office of the Detroit, Lansing & Northern Railroad was located at 28 Newberry Building. In 1891, John B. is listed as a commissioner at the Board of Public Works. He was also a Civil War veteran, having served with the Fourth Cavalry from Hillsdale County, Michigan. John B. died on Nov. 23, 1892 at the age of 55. Emma Mulliken remained in the house with son, Harry, a student, until sometime between 1895 and 1896 when she moved to a new address at 91 Farnsworth.

Susanna T. (Anna) Ross, widow of Edward H. Ross, with son, John L., moved into 800 Second Ave. around 1897. US Census records indicate that Susanna was born in Ireland in 1838 and immigrated to the US in 1848. John L. Ross owned the Ross & Young Machine Co, manufacturer of automotive parts and engines. In 1915, Ross & Young, which had become the Ross Automobile Company, debuted the "Ross Eight" automobile, priced at $1,350, at an automotive exhibit held in Chicago. The 8-cylinder engine was attracting a lot of attention at this exhibit. Other automotive manufacturers exhibiting 8-cylinder vehicles that year were Cadillac, Cole, Abbott, Remington, King, Briggs-Detroiter and Regal. From 1904-1905, also listed at this address is the Eugene Chemical Company.

The John D. Doyle family moved into 800 Second Ave. in 1913. Family includes wife, Suzanna (Susie), son, Thomas Allen, and boarder, Florence R. Cook. Thomas worked as a chauffeur for the People's State Bank. Florence Cook was a dressmaker. According to US Census records, the Doyle family was originally from New York.

Worked as a machinist.

Worked as a foreman at the Michigan Shade Cleaning Co.

During these years, Colin Fox was employed as an accountant for the United News Association. Prior to this time, he worked for the Western Union Telegraph Company. 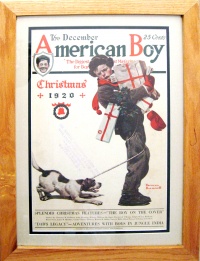 Jacob Cotner, Jr. was the Secretary and Treasurer of the Collector Publishing Company (later to become Sprague Publishing Company) located in the Telephone Building on Clifford Street. Born in Mansfield, Ohio in 1860, he spent his youth in that state and, as a young man, worked primarily as a salesman for a variety of business interests. He moved to Detroit around 1889 and, while working for the Collector Publishing Company, was instrumental in the development of "The American Boy" magazine (first published in 1899), a highly successful and popular publication in the early part of the 20th century, becoming its business manager. He married Etta Marie Trowbridge of a prominent family from Toledo and they had three children. His wife passed away in 1899 and in 1901 he was married to Celia L. Burke of Ann Arbor. Upon his death in 1921 at the age of 60, The Detroit Free Press said of him, "Mr Cotner did a practical work for the youth of this country that can scarcely be estimated. He was one of those who went to the root of the matter in an endeavor to help build up the citizenship of the country". In addition to his work in the publishing industry, Mr. Cotner was on the board of trustees of the First Congregational Church of Detroit, served for 8 years as a director of the Detroit YMCA, was president of the Ohio Society of Detroit and was a member of the Detroit Golf Club.

William Radcliffe was a clerk for D.M. Ferry & Company, a seed company that was one of the first ever to package seeds for sale in stores. The company was founded by Dexter Mason Ferry of New York who came to Detroit in 1852. By 1902, D.M. Ferry had purchased land in Avon Township off of Hamlin Road in order to more easily expand operations. The "descendant" of this company, The Ferry-Morse Seed Company is today located in Fulton, Kentucky.

Robert Waddell was vice president and co-founder of the Independent Stove Company, established in 1905 by three former employees of the Michigan Stove Company. By 1908, the operations had moved to Owosso, Michigan where a new building was constructed to house offices and a foundry. Their product line expanded to include a variety of stoves, ranges, furnaces and oak heaters. In 1933, the name of the company was changed to the Renown Stove Company. They were in business for 45 years, finally closing their doors in 1950 having produced approximately 300,000 stoves and heaters in all.

Van Ness Delamater was born in July, 1878 in Hudson, New York and was a graduate of Cornell University, class of 1900. He began work in 1915 for the Hyatt Roller Bearing Company, part of the railroad division of General Motors (this perhaps explains his one year stay in Detroit). He was married in 1904 to a fellow Cornell graduate, Jacqueline Montague Newton, and together they had five children. Sadly, he and his eldest son, Van Ness Delamater, Jr. (also a Cornell graduate) died in 1931 on a vacation trip to Algonquin Park, Ontario, when their boat was capsized during a strong storm and they both drowned. 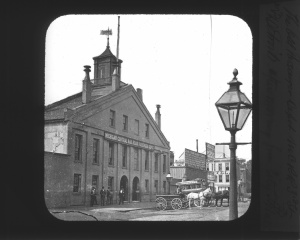 Living at 808 Second Avenue starting as early as 1885 (according to Dau's Detroit Blue Book) Eralsey Ferguson, his wife and two children, John G. and Joie E. Ferguson. Mr. Ferguson operated E. Ferguson & Company, cartage agents and freight handlers. The Detroit City Directory of 1864 shows that he was working as a depot master for the Michigan Central Railroad and resided at 164 Griswold Street. From 1880-1885, Ferguson was the landlord of the Cass House Hotel, once located on the SE corner of Third and River. He was a member of the First Congregational Church of Detroit and died in 1892.

The Woolfenden family moved to this address shortly after the death of Frederick Woolfenden, a prominent Detroit banker and co-founder of the Dime Savings Bank. Living here beginning in 1893 was his widow, Ella Raymond Woolfenden and their four sons, George Raymond, Edward Percy, Frederick and Francis Raymond. Frederick Woolfenden was an Englishman born in Belfast, Ireland in 1847 and was educated in Manchester, England. He arrived in Detroit in 1863 and immediately began work clerking in various banks, among them the Merchants and Manufacturers National Bank. Later he began working at the post office and was soon promoted to Assistant Postmaster, a position which he held for ten years. Leaving the post office, he co-founded the Dime Savings Bank of which he was Cashier and Manager. In addition to his business interests, Frederick Woolfenden was an ordained Episcopal minister and sat on the board of the Detroit College of Medicine.

By 1919, his widow, Barbara is living at this house with their children, Samuel, a machinist, and daughter, Wilma. 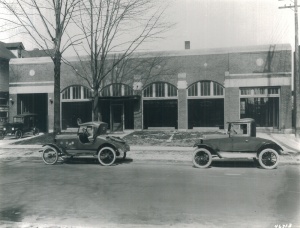 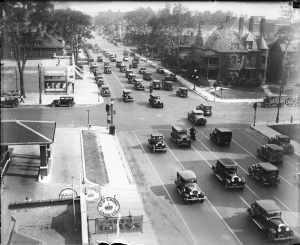 The present building at 4444 Second Avenue was built on the site of the three homes mentioned above in 1920. Below is information gathered from the Polk City Directories showing the businesses that occupied this address from 1921 to present. 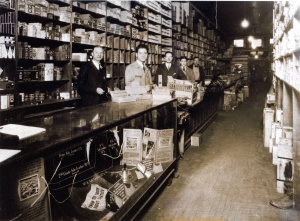 Wendt and Kanners, Samuel Kanner's earlier location at 33 Eliot St in Detroit. Around 1925. 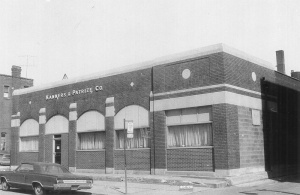 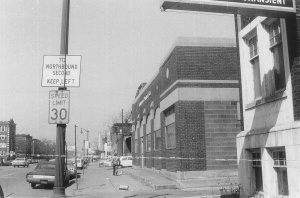 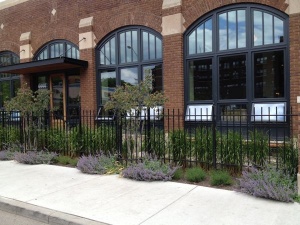 In 1945 Victor Kanners wrote of his remembrances of being a POW during WWII. The following links are his original thoughts, starting with a cover letter to his secretary, Dorothy, followed by his 2-part story. Finally, there are 2 post-war essays written by Victor, one in 1980 and one in 1987.