Growth habit: A low growing vining plant generally not over 18" tall unless grown on a pole. Vines can reach 10 feet in length.

Pests: Not affected by many pests, but I have seen Mealy Bug on rare occasion.

Conditions for Success with Pothos: Pothos does have some conditions that must be monitored for success. The number one area to watch is the root system. Pothos doesn’t like wet feet.

The pothos does not have a deep root system and it can very easily be kept with too much water in the soil. Under lower light levels and cooler temperatures the soil should be allowed to dry about half way down. Try not to soak the soil but water lightly around the entire pot. Pothos are grown from leaf-eye cuttings. Especially with the golden pothos growers try to select cuttings from plants that have a high marbling of yellow and green. The higher the light the brighter the yellows. The average 6 or 8 inch pot can have 15 to 35 cuttings, with each one producing a new plant. With that many plants making up one pot you can see how important it is to not over water these plants. If you find plants that are “underrooted”, make sure that the pot does not sit in water. Drain the excess water off. Keep the plant on the dry side.

Before you buy a pothos, pop it out of the pot, and look at the roots. You should see a healthy root system that looks full and active.

Plants that are over-watered have mushy roots and rotted stems which pull out of the pot easily.

During the year as your pothos grows you’ll need to prune it back. Be selective and trim the vine back to 2 inches from the soil line. This will help promote new growth and make the plant fuller.

(This plant did not thrive in our Greenhouse and was removed.)

CHARACTERISTICS: Ladyfinger or Raphis Palm, as they are called have very shiny dark leaves. Their fronds stretch out like fingers on a hand from an upright furry trunk.

They like their soil to stay moist. Drying the soil severely can cause the foliage to turn gray, brown and crunchy. If the soil becomes too moist, the soil can encourage root rot and damage will eventually show up in the foliage with brown tips, spotting on the new growth and entire parts of the plant turning brown.

New fronds come out from the center of the trunk. Trim off lower leaves as they age and become discolored. If new growth is dead, the whole trunk needs to be cut out, because it has rotted, and the leaves will all eventually become dry and crunchy.

Rhapis excelsa, the Lady Palm, is grown in garden and used indoors in homes and offices around the world. The Rhapis adapts to a wide range of climates, soils, and environments, making the “lady Palm” popular for many applications.

Rhapis excelsa “Lady Palm” is the most well-known and widely cultivated species, easily adapting to most interiors, and used in both tropical and subtropical landscapes throughout the world. One distinction of Rhapis Excelsa is that it has a multitude of named varieties in green and variegated forms. Many of these named varieties would be considered collector’s items with quite a few of the varieties being selected dwarf types.

The “Lady Palm” can grow to more than 14′ feet in height with clumps reaching enormous width, often having a diameter as wide as their height.

Growth rates of Rhapis excelsa vary with culture and environment. In commercial production the Lady Palm usually grows 8″ – 12″ inches in height per year. When grown indoors as houseplants, the growth rate decreases considerably. Find a plant that fits an area indoors and you won’t have to worry about the Rhapis outgrowing its space and it can work as a natural air cleaner. Generally speaking growers would classify Rhapis as a slow grower. A typical 6 – 8″ potted plant has been growing in the nursery for minimum of 2 years. It is not unusual for the larger sizes to be nursery grown for 4 – 7 years. This is one reason you find Rhapis being more expensive then other palms. Believe me, they are worth the expense. You will find two styles of “Lady Palms” in your nurseries and garden centers. One I would call a “butterball”. These plants, grown from seed, have lots of canes and a 3 – 4′ foot plant can be 3 – 3-1/2′ wide. Full of leaves top to bottom and you usually find these in pot sizes from 6″ up to 14″. The other style is a more upright and open plant. These plants have been dug from the field, are thinner in appearance but have more height. You usually find these in pot sizes from 14″ up to 28″ in heights ranging from 5 – 14′. They are more of a specimen plant with each one having its own unique look.

Rhapis are some of the easiest palms to grow, but each species has its own particular environment and culture requirements. This makes Rhapis very versatile. Both 6″ and 8″ pots can be used as table top and accent plants, while 10″ and up are free standing specimens. Wherever you may live, Rhapis is one plant that will thrive in your house or landscape. 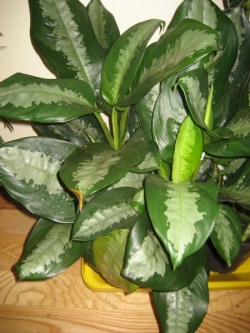 Humidity: generally prefer humid conditions, buy they are adaptable to all sorts of conditions and will easily adapt to less humidity.

Remove yellowed leaves. Remove the creamy, waxy flowers as they emerge. Aglaonema tolerates a wide range of conditions, including poor light and dry air. Removing new growth as it emerges will slow growth and delay leggy appearance. If plant gets too leggy, fertilize the plant, then the next week cut the longest stem with the fewest leaves to within 1 inch of the soil surface. New leaves will emerge in a few weeks. Plant will not tolerate direct sunlight. Keep evenly moist during the growing season; somewhat drier in the winter. Pests and Problems Leaf edges will turn brown if the level of soluble salts is too high or if plant is in a draft or dry air. Erwinia chrysanthemi is a disease whose symptoms include spots surrounded by yellow halos, and with internal infection, leaves may wilt, yellow and collapse. Erwinia infected plants should be destroyed. Commonly called Erwinia blight. Dasheen mosaic virus affects members of the Araceae family. In Aglaonema, symptoms are mosaic patterns on the leaves, stunting of growth and disfiguration of the plant. Usually looks bad without the plant actually dying. Phytophthora is a fungal leaf, root, and stem disease of the water-mold variety affecting Aglaonemas It is related to Pythium and causes mushy, watery leaf spots which turn rust colored with yellow halos when dry. Severe infections result in complete plant collapse. Rhizoctonia is a fungus that causes a disease with symptoms characterized as a root rot as well as an aerial blight. The entire plant and surface of the growing medium may be affected by rusty-colored minute filaments (the fungal body).

It's not necessary to fertilize a Chinese Evergreen very often, however, I generally feed all of my houseplants with a long acting fertilizer like Osmacote. That will keep them well fed for three or four months. The main thing to consider when growing Chinese Evergreens is that they require a constant temperature and don't like drastic or rapid temperature changes. Although Aglaonemas generally prefer humid conditions, they are adaptable to all sorts conditions and will easily adapt to less humidity. They can easily be propagated by cuttings. Simply place the cutting in a clear glass of water. Be sure you remove the lower leaves. Whenever rooting a cutting, all leaves up to the water line should be removed. They can even be rooted directly in soil. 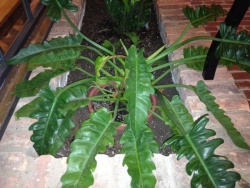 Leaves: Varies. Ours is deeply lobed.

Brief description: Philodendron is a large genus of flowering plants in the Araceae family, consisting of about 900 species according to TROPICOS (a service of the Missouri Botanical Garden). Other sources quote different numbers of species: S.J. Mayo reports about 350-400 formally recognized species, whereas Croat lists about 700. Regardless of number of species, the genus is the second-largest member of the arum family. Taxonomically, the genus Philodendron is still poorly known, with many undescribed species. Many are grown as ornamental and indoor plants. The name derives from the Greek words philo or "love" and dendron or "tree". They are commonly called by their generic name. 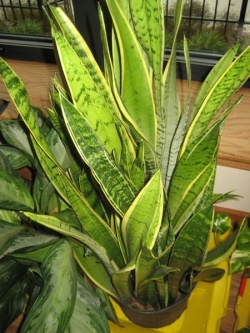 Growth Habit: Stiff leaves grow vertically from a basal rosette. Mature leaves are dark green with light gray-green cross-banding and usually range between 70–90 cm in length and 5–6 cm in width.

Propagation: It can be propagated by cuttings or by dividing the rhizome. The first method has the disadvantage that the variegation is likely to be lost. 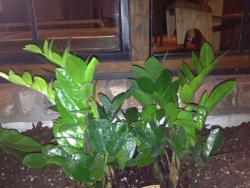 Growth Habit: It is a herbaceous plant growing to 45-60 cm tall, from a stout underground, succulent rhizome. It is normally evergreen, but becomes deciduous during drought, surviving drought due to the large potato-like rhizome that stores water until rainfall resumes. The leaves are pinnate, 40-60 cm long, with 6-8 pairs of leaflets 7-15 cm long; they are smooth, shiny, and dark green. The flowers are produced in a small bright yellow to brown or bronze spadix 5-7 cm long, partly hidden among the leaf bases; flowering is from mid summer to early autumn.

Temps: Best growth between 65 and 79 degrees

Watering: Prefers drier rather than damper.

Propagation: May be propagated by leaf cuttings: typically, the lower ends of detached leaves are inserted into a moist gritty compost and the pot enclosed in a polythene bag. Though the leaves may well decay, succulent bulb-like structures should form in the compost and these may be potted up to produce new plants.

More information: Zamioculcas is a genus of flowering plant in the family Araceae, containing the single species Zamioculcas zamiifolia. It is a tropical perennial plant native to eastern Africa, from Kenya south to northeastern South Africa. Dutch nurseries started wide-scale commercial propagation of the plant around 1996.