We started with a ceremonial removal of the first brick on August 30th. 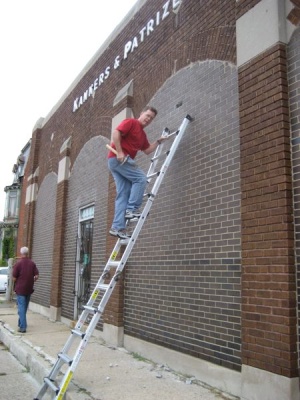 Removing old insulation from above the suspended ceiling and placing it into a temporary room. The insulation will be used again in another area of the Green Garage. The work was done by Kenco Company.

We had to begin working in the addition to get away from all the noise and dust, so we set up a work area there. The materials are coming off the walls and are being taken for storage to the addition.

We hired Eduardo Martinez to do the bulk of the deconstruction work. He started with the walls. When the wood was removed, Tom O'Connor and others (like Steve Lambers, pictured) removed nails so we could use the wood again.

After the walls, we wanted to remove the suspended ceiling. First, though, we had to remove the bulk of the old insulation that lay on top of the panels. So we hired Kenco to come in and suck out the insulation. Instead of taking it to a landfill, however, we asked them to come up with a way to store it in the building so we could use it later when we start adding insulation to the remodeled building. They developed a plastic-lined room and found a way to pipe the insulation in. These were loud days at the Green Garage. (But it worked).

Updated views of the interior as it is being deconstructed.

Some views of the deconstruction. New scale to weigh outgoing materials. Volunteers and visitors.

This week the interior front windows were removed, and more volunteers worked on removing nails.

This week the parapet (a wall that stands higher than a roof) was disassembled out front.